Koh Tao history prior to 1943, the island was uninhabited. At that time, only fishing boats visited the local waters in search of fish.  Koh Tao was a jungle with an abundance of turtles and big flocks of pied imperial and Nicobar pigeons.

On June 18, 1899, His Majesty King Chulalongkorn – Rama V (1853 – 1910) visited Koh Tao, and had his initials carved on a large boulder at Laem Jor Por Ror on the southern end of Sairee Beach.  It is now a place of worship and reverence for local residents and visiting Thai people.

Koh Tao as a Political Prison

During the years of 1943 and 1944, Koh Tao was used as a political prison with prisoners of the Borawadesh Uprising transferred here from Koh Tarutao.  The prison itself was located in Mae Haad Bay in an area of about 35 rai. There were fifty four political prisoners with fifty other inmates and fifteen wardens. According to the prisoners, Koh Tao was a living hell with its shark infested waters, and daily life was a constant struggle for survival.  Malaria was rife and they were often starved. 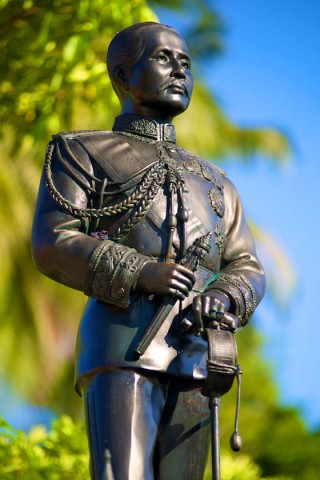 One of the prisoners wrote:

In 1944, the prisoners were released and everyone returned back to the mainland leaving Koh Tao deserted once more.

The First Pioneers on Koh Tao

The history of Koh Tao in 1947, twin brothers, Ta Euam and Ta Oh came to Koh Tao from Koh Samui.  The first ‘pioneers’, they sailed here in a traditional boat with two masts and handmade sails made of woven palm leaves and cloth.  They brought with them a supply of rice, and on arrival, they cleared some land and used what was left of the demolished prison to build a temporary shelter.  Later, they brought their families here and settled on the north of Sairee Beach.  Six years later, others mostly from Koh Phangan arrived here to start a new life.  They lived simply and sufficiently by fishing and cultivating the land for coconut plantations, rice paddies and orchards.  At that time there was an abundance of turtles, so many in fact, that at certain times of the year, the beach became black. 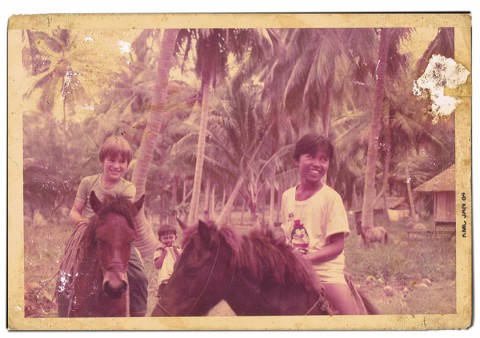 Old photos from the collection of an early traveller. Horse riding was a common form of transport back in the 1980’s. Photo by Annick Syrius.

In the middle of 1977, the first travellers came to dive and explore the undiscovered and pristine underwater world.  They arrived on fishing boats and the boats which then transported coconuts.  In 1984, the first resort on Koh Tao, was established in Shark Bay.  Called Niyom Bungalows, the rooms were just 30 Baht per night.  Since then, Koh Tao has changed from one of fisherman and gardeners, to a place of tourism which now offers the infrastructure, facilities and choices of activity to serve about 350,000 travellers each year.